Story by Charlie Walcott
As told to SO Editor Joe Welklin

Science Outside: That’s not something you hear every day, why follow a pigeon with an airplane?

“Well, the question was how do these pigeons get home?” He replied. “Our hope was by actually following them on their homeward journey we would get a sense of what kind of cues they were paying attention to, and then you can manipulate cues and see how it was reflected in their homeward tracks.”

His well-practiced answer rolled off of his thoughts so smoothly, it was clear he had explained his pigeon following antics many times before, but the excitement that accompanied his explanation and the chuckles that interspersed the following stories made it feel like I was sitting in the plane right next to him.

Here is one of Charlie’s best stories. But first, if you’re not familiar with radio telemetry and you’re wondering how Charlie could possibly follow a bird with an airplane, read this short primer: He didn’t do it by sight! Radio telemetry relies on much of the same technology you use when you listen to the radio. But in this case, researchers use a directional antenna to find a transmitter that is usually attached to an animal. The transmitter sends out a radio signal at a set interval of time, such as once every three seconds, and if you point the antenna towards the transmitter you will hear a strong signal, often in the form of a beep, and if you point the antenna away from the transmitter you’ll hear a weak signal. By paying attention to the signal strength, researchers are able to determine the direction of the transmitter and estimate the distance to the transmitter, allowing them to hone in on their quarry. Or at least they can try…

We had developed a little radio transmitter to put on homing pigeons, and we were going to follow a pigeon with an antenna in the airplane for the first time from the airport back to its loft at Harvard University.

We let the pigeon go and it flew off obediently. So we got airborne in the plane and located the pigeon flying just south of the airport by about a mile, and then it stopped. It didn’t move. So after circling for a while and watching the money go past – airplanes are expensive – we landed and went and located the pigeon from the car since we knew approximately where it was.

We found it was sitting on the telemetry antennas of the Lincoln Laboratory, which is a highly classified part of MIT where they research communications technology. The transmitter on our pigeon was not very powerful, but still if it’s sitting physically on an antenna, it’s going to create quite a disruption.

SO: So you’re thinking right now that the MIT guys are going crazy because the pigeon is disrupting their communications?

Charlie: Yeah, absolutely, and it’s our pigeon sitting on their antennas. The place is surrounded by a huge chain-link fence with barbed wire and signs that say “KEEP OUT! THIS MEANS YOU!” So the question was what to do about it. We decided the best thing to do was nothing, which we did.

After about a half-hour or so the pigeon takes off and flies away. So we drive to the airport, get the airplane and follow it for a while and then it stops again in a big patch of woods with some buildings. And it stops we can tell on one of the buildings. So once again we put the airplane away, get the car, and go and locate the pigeon.

This time we find that the pigeon is located on a place that says: “McLean Hospital for the Mentally Insane”. And we thought, do we really want to go in there and say we’re looking for a pigeon? We might be welcomed but it might be hard to get out!

With that we decided to call it a day. The pigeon flew home the next morning and that was our first tracking experience.

SO: Charlie went on to discover that pigeons use both the magnetic field of the earth and the location of the sun to navigate their way home from unfamiliar terrain. His work on work on navigation in the common pigeon in the 1970s and 80s has shaped the way scientists study animal navigation ever since. If you’re interested in learning more, read this paper: http://jeb.biologists.org/content/jexbio/199/1/21.full.pdf 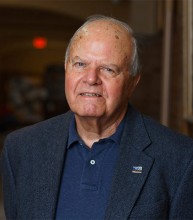 Charlie Walcott is a Professor Emeritus at Cornell University and a world expert on animal navigation. For more on his research, see: http://nbb.cornell.edu/charles-walcott